35 weeks and one day

I was having the best pregnancy ever. Even with terrible heartburn 12 hours a day, I barely complained. (Really, ask Stacey). I LOVED being pregnant.

So here is what happened, and why Jack and Izzy (aka Peanut Butter and Jelly) were evicted so early.

On Monday I had an NST appointment. They kept me for an hour because they were noticing that Jack's heart rate dipped a little bit on each contraction. (4 in an hour, mind you). The nurses spoke to the doctor and he said I just needed to come back tomorrow for observation again.

About an hour later my contractions had moved to about a minute apart, but to me they were pretty small. By 6:00 p.m. we were on our way to the hospital. I was very confident the contractions would be stopped and I would just be home and on bed rest for the next week or two.

Once I was checked in and given meds, my contractions never really stopped. My cervix was closed, but those pesky contractions were causing heart rates to go all over the place for Jack.

We spent the night and the next morning my doctor comes in to tell me we are having these babies later today. Apparently after reviewing the two latest ultrasounds Jack did not grow at all, while Izzy did. This is not good. I cry. Stacey cries. He tells me it will be alright, having the babies out will mean Jack will grow and be fine.

At about 10 a.m. we (and by we I mean Stacey) make phone calls and family plans to arrive in the next hour or so. Only suddenly Isabel's heart rate drops and the nurses are running around shaving things, dressing Stacey in hospital gowns and the next thing I know I am being wheeled into an operating room. 30 minutes later Jack and Izzy were born.

They were both sent to the NI..CU where Isabel stayed for four days (and I secretly think she never needed to be, but better safe than sorry). Jack stayed for 8 heartbreakingly long days due to hypoglycemia.

The nurses at the Hospital and at C..HOC were amazing. They made us feel as better about leaving them and helped us care for them while we were visiting. Jack charmed every nurse there and when we would run into a nurse or volunteer they would say, "Oh you are Jack's mothers, he is so cute!" Seriously, on the elevator more than once.

Leaving him there was the worst thing I have ever done. Leaving my 4 day old with babysitters (the best in the world mind you) was the other worst thing I have ever done. To all the parents who have ever been in the NIC..U, bless your hearts. I am so glad that the babies will never remember the NIC.U, but I know that I will never forget it. I cried every day I while I was there and every time I had to leave Jack. He was so alert, laying in his little isolette with cords and wires running from his head right down to his feet. He was pricked on the heel every three hours for a blood sugar test and made himself bleed from rubbing his feet together and disturbing his PIC line.

I knew he was going to be okay, though. And I know just how lucky we were/are. The N.ICU was full that week. With babies much sicker than mine.

But now they are home!! I am loving every exhausting minute. All that is left for me to combat is the grief of not being able to carry them longer. Of the ending of my pregnancy before I or the babies were ready. I dream about feeling them kick me and just thinking about it makes me cry. Silly, I know. But darn these post-pregnancy hormones. One day I will be able to look at my maternity photos again.

So here are some better pictures of the dynamic duo. No wires, no isolettes, just cute little babies that squeal and coo and cry. And poop. 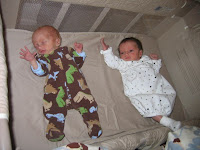 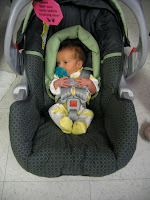 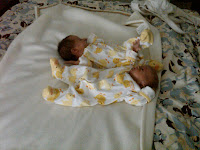 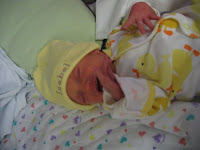 Labels: The N.icu is no place for babies

They are adorable! I totally felt the same way after delivering our boys early, I still feel guilty sometimes for not being able to carry them longer, hopefully it will go away someday. Its funny you mention your dream, I just told my wife this morning that I dreamt they were still inside and I could actually feel the kicks! Bliss! I still miss that, and its going on 5 months! It is absolutely the hardest thing in the world to leave your new babies with someone else and you are lucky to have such a short stay (although Im sure it was way too long for you girls!). So happy to see they are both home and healthy now. Let the fun begin!

So happy to read that your babies are home! They are too precious! Wishing you all calmness and sleep.

I love little babies in ducky clothes, they are SO adorable ladies. :)

I'm so glad your nicu time was short and that you had great staff. It makes a world of difference.

Oh yay! They're home! Glad your NICU stay was on the short side, though I know when living it, it goes on forever.

I remember the post pregnancy feeling, sorta empty, wishing every gas bubble you feel was a baby kick...bittersweet that.

thank you for sharing this with us. im sorry the end of your pregnancy & delivery didnt go as you had dreamed. ((hugs))

your babies are *beautiful* and im so glad to hear they are out of the nicu and home safe and sound with you. they look so big - its crazy that you were carrying that much baby inside of you just last week!

I'm so happy to read that both Isabel and Jack are home. That must have been so hard leaving them behind.
PS Love the ducky outfits.

They are beautiful! So glad that they are both home and doing well.

They are beautiful! Congratulations!

thanks so much for letting us know how it all transpired - it really sounds like a scary roller coaster from over here. i can't even imagine how rip your heart out awful it must be to see your babies in the NICU - you are all troopers! the babies are so cute and I love the names. I hope that those hormones give you a break and that the grieving process brings healing.
keep those pictures coming ( between all the feedings, lack of sleep and pooping of coures!)
(big hugs to you all)